We were invited for a workshop at PH Zurich’s UNM meeting Teaching with Digital Media to present location-based mobile learning as a teaching strategy. The event was fully booked and divided in keynotes and workshops. 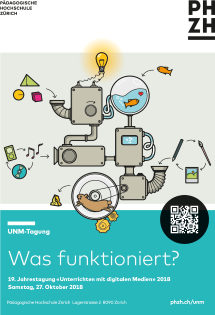 The first keynote was held by Anja Wyden Guelpa (Director & founder of civicLab) about “Das Rathaus als Vergnügungspark – Was funktioniert bei der Demokratievermittlung?” to foster the engagement of the next generation’s participation in our democracy in a contemporary and digital way. The second keynote was held by Paolo Rüegg with “Das digitale Sackmesser” who spoke about acquiring a skill set of programming (learning languages) to understand and create the world of tomorrow.

Afterwards, the practical part began with workshops about education that works. Here, OMLETH was presented in the rainy afternoons. After a quick introduction, participants – mainly scientists and didacts of different subjects, general pedagogues, and teachers – experienced the tool with a short education trail around the campus, although the weather was not very amazing. However, this is real education! Back in the seminar room, they had to reflect on the strategy and tool using a collaborative mindmap tool. As a next step, a talk about using OMLETH under real conditions followed. Marianne Wülser, a teacher from AKSA,  presented the  experiences and learnings using OMLETH in Geography. In the final discussion, the participants asked questions where the latest findings of the OMLETH research study were embedded. The whole workshop’s slides can be found here.

The UNM meeting 2018 was a great experience to learn how teachers from every level and field think, act and reflect about location-based mobile learning.